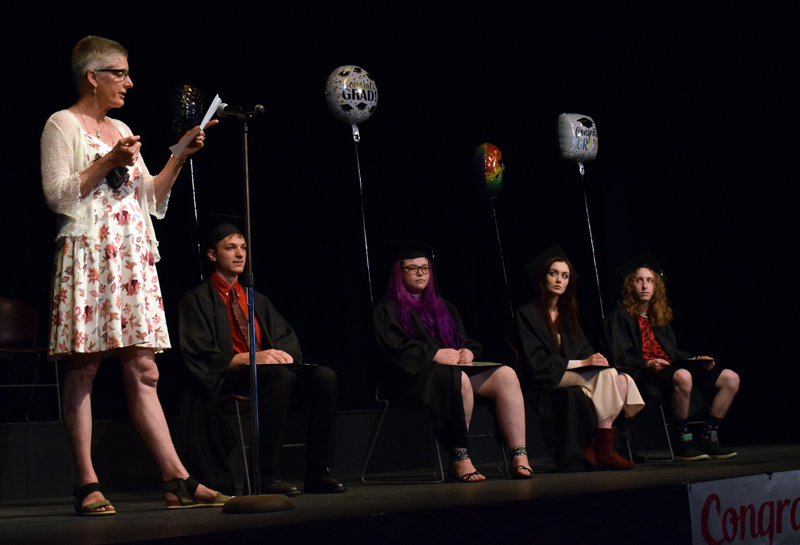 Central Lincoln County Adult Education instructor Elizabeth Potter reads a poem by Edgar Guest about perseverance, “It Couldn’t Be Done,” before toasting to the 2020-2021 graduates of the program during a ceremony at the Lincoln Theater on Tuesday, June 8. From left: Elizabeth Potter, Zachary Baker, Emmalie Blanchard, Honora Boothby, and Norbert Ferrero. (Evan Houk photo)

Central Lincoln County Adult Education graduates celebrated their accomplishment with a song, personalized poems, a toast, and a punch and cake reception at the Lincoln Theater on Tuesday, June 8.

One of the five graduates in the 2020-2021 class, Honora Boothby, showcased her flawless voice by singing “Meadowlark” from the musical “The Baker’s Wife” near the start of the ceremony.

Toward the end of the ceremony, CLC Adult Education Director Pam Sperry continued her annual tradition of reciting personalized poems for each of the graduates. Each ode contained an equal measure of humor, heartfelt compliments, and honest reflection.

“A voice like an angel, she can make those high notes sing. When it comes to making music, this gal has everything,” Sperry said in her poem about Boothby.

In addition to Boothby, Zachary Baker, Emmalie Blanchard, and Norbert Ferrero participated in the ceremony. Lily Winchenbach, who completed all of her classes remotely, even after in-person classes resumed at CLC Adult Ed earlier this year, was not able to attend as she is currently in Colorado, Sperry said.

Ann Hassett, AOS 93 director of curriculum, assessment, and instruction, delivered the commencement address, during which she put the achievement of the adult education graduates into a historical and cultural perspective.

“It’s probably not surprising that many creative and entrepreneurial people have chosen this path,” Hassett said.

She then listed some names of famous people who received a GED or high school equivalency diploma in the last century, including Jim Carrey, Michael J. Fox, Beyonce, Elton John, Dave Thomas, the founder of Wendy’s, and George Eastman, the founder of Kodak.

“By all accounts, the adult education model — individualized, personalized, and flexible —must be the education future for all of America. This change is both essential and urgent,” Hassett said.

CLC Adult Education offers free classes to prepare students for the HiSET exam. If they pass the exam, they receive a high school equivalency diploma.

The HiSET, which replaced the GED in Maine, can double as a college entrance exam if the student achieves a score of 15 or higher.

Baker delivered a speech on behalf of the graduates, talking about the flexible model of his “unschooling” upbringing and how his love of Legos eventually compelled him to learn how to read and want to write and speak properly.

“Unschooling is a more hands-off, less structured approach to homeschooling. It is based on the idea that you do not need to force certain topics on the student because they will eventually need to learn or want to learn those skills,” Baker said.

CLC Adult Education instructor Elizabeth Potter then led a toast and read a poem by Edgar Guest about perseverance, “It Couldn’t Be Done.”

Potter mentioned the difficult year the graduates had with distance learning and other challenges of the COVID-19 pandemic.

“You persevered, you worked at home, we worked in breakout rooms on Zoom, whatever was necessary,” Potter said. 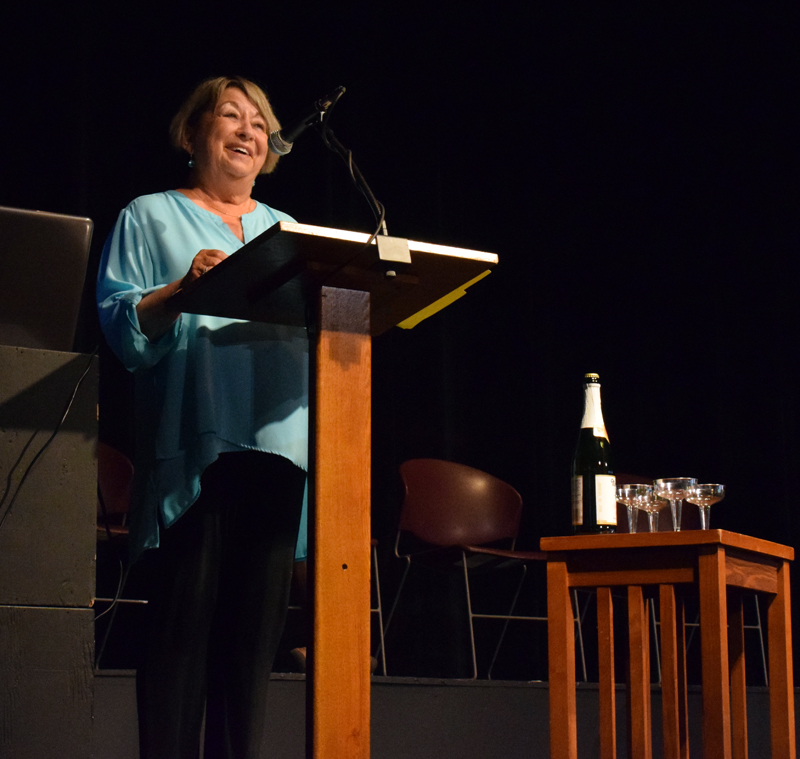 Central Lincoln County Adult Education Director Pam Sperry introduces the 2020-2021 graduates during a ceremony at Lincoln Theater on Tuesday, June 8. The graduates celebrated with a song, personalized poems from Sperry, a toast, and a punch and cake reception. (Evan Houk photo)

During an April 15 phone interview, Sperry reflected on what a challenging year it has been for the CLC Adult Education program and its students, going back and forth between distance and in-person learning.

The program started a HiSET online academy shortly before the pandemic reached Lincoln County in March 2020. Instructors scrambled to keep in touch with all the students, acquire more licenses for the academy, and get it fully up and running within about two weeks, Sperry said.

Sperry said the adult education program was in danger of closing due to the loss of revenue from enrichment classes associated with the COVID-19 pandemic. In a typical year, the program would bring in about $30,000 from fees for the enrichment classes it offers, but only brought in $6,000 in the 2020-2021 school year. 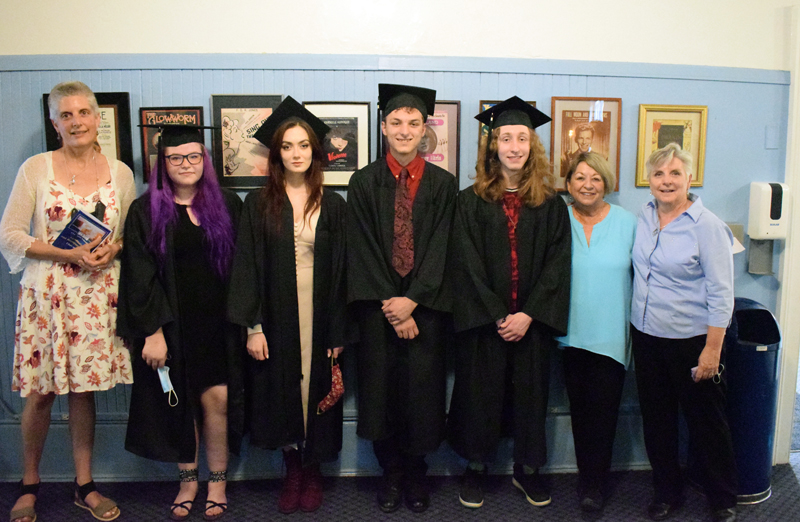 “That’s what makes up a good chunk of our budget, that revenue. And we just basically lost it all,” Sperry said.

Part of the reason the revenue dropped so sharply was because the program had to halt nearly all in-person enrichment classes, such as dancing, pottery, or Tai-Chi, which are difficult to teach virtually.

Typically a physical brochure is sent out to everyone’s mailbox in Lincoln County, but in the interest of cutting costs, no brochure was mailed out this year, Sperry said. The program also worked to cut costs in other areas in an effort to make up the deficit. 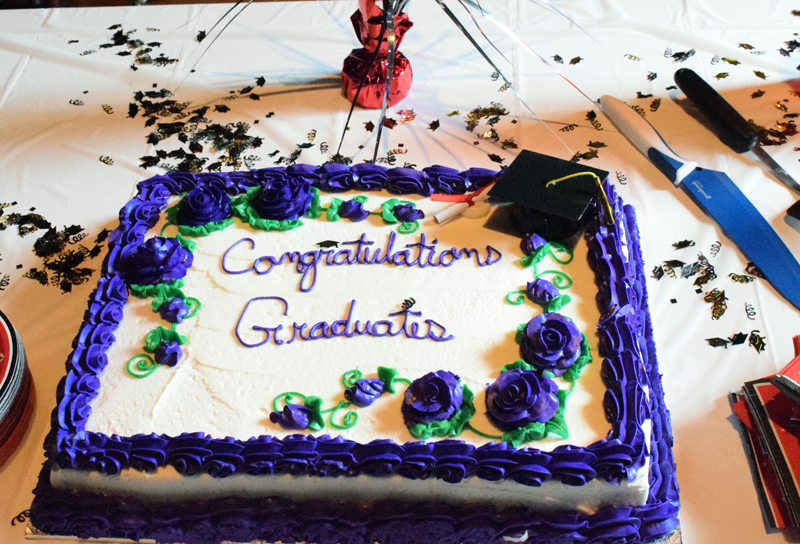 Central Lincoln County Adult Education graduates celebrated with a cake and punch reception after a ceremony at Lincoln Theater on Tuesday, June 8. Four of the five students attended the ceremony. (Evan Houk photo)

Thankfully, the Burns Family Foundation Inc., a Damariscotta-based charitable organization that funds education initiatives, stepped in and covered the amount that the program was in the red, Sperry said.

After Sperry spoke at the South Bristol annual town meeting in March, Matt Newman, a lawyer for the Burns Family Foundation, contacted her and within a week, CLC Adult Education had a check for $25,000 to cover its projected deficit.

“We were dancing down the hallway, we couldn’t believe it,” Sperry said.

She thanked the South Bristol selectmen, budget committee, and townspeople for contributing extra funds to the CLC Adult Education program at annual town meeting. The town’s contribution to the program increased by $1,642 to $5,000.

“South Bristol is the only town, so far, that has gone above and beyond and given us more than we asked for,” Sperry said at the meeting. 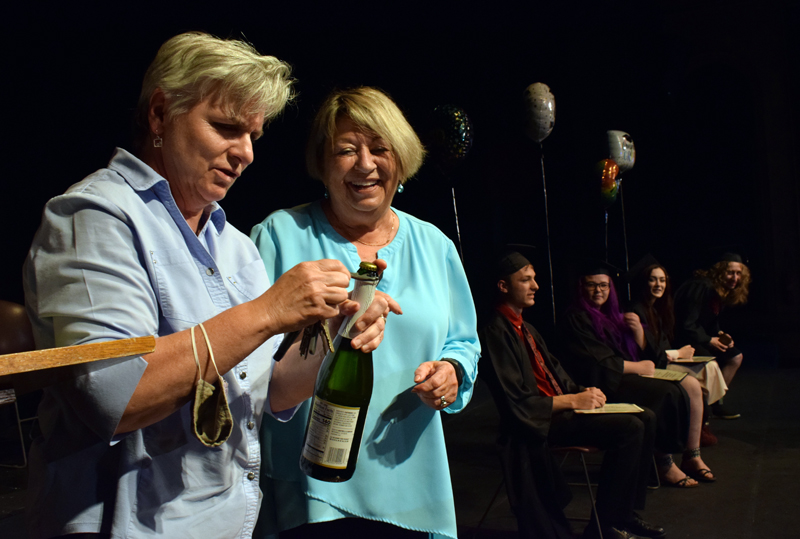 Central Lincoln County Adult Education instructor Bonnie Merrill (left) works to open a bottle of sparkling juice for a toast to the class of 2020-2021 as Director Pam Sperry and graduates look on during a graduation ceremony at the Lincoln Theater on Tuesday, June 8. (Evan Houk photo)

The crowd applauded Sperry after she spoke, showing support for the CLC Adult Education program.

Sperry noted, however, that the transition to offering the distance learning option has been a silver lining, particularly for students with high anxiety who prefer to learn virtually.

She is hopeful the program can rebound this year with the COVID-19 pandemic waning and with enrichment classes returning to in person instruction.

“I would hate to see us close our doors, we’re such a valuable resource to the community,” Sperry said.