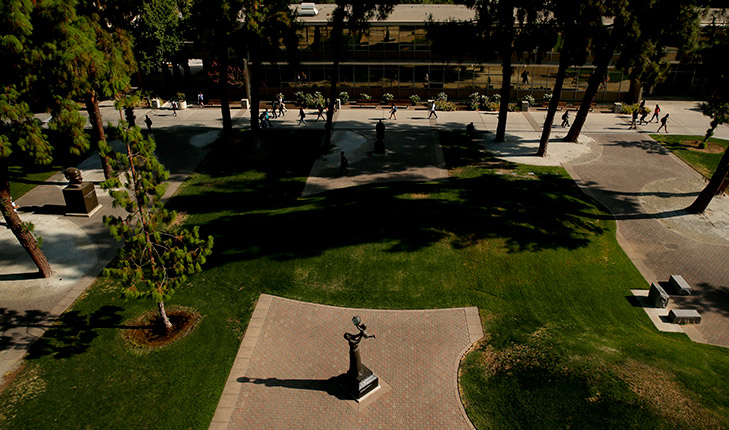 July 18, 2021 – By BoNhia Lee – Under the shade of tall pine trees in Fresno State’s Peace Garden, students relax on grassy knolls or take a break on wood and stone benches alongside some of the world’s most well-known social activists and peace leaders.

More than three decades ago, Fresno State faculty and students were inspired to fundraise for the creation of a bronze bust memorial of Mahatma Gandhi, a prophet of nonviolence and father of the 20th-century human rights movement. Thus, the creation of the Peace Garden, just north of the Henry Madden Library, became a reality.

Since then, three more sculptures were added, and the Peace Garden has become an inspiring  landmark for prospective students, their families and school groups on campus tours.

The newest addition, a fifth sculpture, is in the planning stage, this time honoring Nelson Mandela, an anti-apartheid activist and political leader who became South Africa’s first black president after spending 27 years in prison for his efforts against racial injustice. He was referred to as “The Father of the Nation” and became a Nobel Peace Prize winner in 1993.

Sunday, July 18, is Nelson Mandela International Day recognizing his values and dedication to the service of humanity while encouraging others to inspire change.

“The monument manifests Nelson Mandela’s ideals of higher education and its power to uplift communities and promote constructive dialogue,” said President Saúl Jiménez-Sandoval. “This belief echoes one of the core values of Fresno State: We believe in the transformative power of education, and in its potential to uplift the quality of life in our region.”

Planning for the Nelson Mandela monument is in the artist selection phase. More details will be shared in coming months.

“His life is an extraordinary example of peace, nonviolence and forgiveness,” Kapoor said. “He taught us that we have a choice of love over hate, forgiveness over bitterness and peace over anger.”

For more information about the Peace Garden, contact Becky Brown at [email protected].